The Monumenta Serica –Journal of Oriental Studies is mainly dedicated to Chinese culture, but its Chinese title, Huayi xuezhi (i.e., Scholary Journal on China and Neighbouring Countries), points to the fact that contributions may also treat subjects such as Japanese, Mongol, Manchu, Tibetan, or Korean Studies, if closely related to China. Until 2014, Monumenta Serica was published annually, starting with volume LXIII, the journal changed to a semiannual publication rhythm.

Thematical Scope of Monumenta Serica:
Submissions to the journal are expected to relate to any field of classical Sinology, i.e., culture, history, religions, philosophy, literature, languages, art, archaeology etc. of imperial China. Topics with a focus on the Republican and the modern era will be considered, too, if they show a strong historical perspective. The same time frame and scope of topics also applies to articles dealing with the “neighbouring countries” of China.

Indices:
Two valuable tools are available for gaining access to the materials presented in Monumenta Serica: A printed general index to vol. I–XXXV (1936–1984) was compiled by Roman Malek S.V.D. and published in 1993. In addition, all articles of Monumenta Serica from the first to the current volume are now searchable online according to author, title, and keywords on the journal’s website at Taylor and Francis. 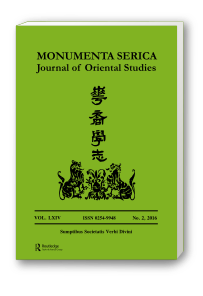