A Contribution to Sinological Linguistics

The Sinitic Languages is the quintessence of Mieczysław Jerzy Künstler’s thirty years of research into the Chinese languages. Originally published in Polish in 2000 as Języki chińskie, this work collected Künstler’s various lectures on the fascinating world of this branch of the Sino-Tibetan language family. It marked the apogee of linguistic research of Chinese languages in Poland. With a keen, intuitive understanding of the workings of these languages, Künstler introduces his readership to the historical development of spoken Sinitic languages. Besides analyzing the various stages of Standard Chinese, he also makes a convincing case for classifying Cantonese, Pekinese, Nankinese, Minnanese, Wu, and other so-called “dialects” as distinct languages. Künstler’s work offers an insightful and detailed overview about synchronic and diachronic research on the major language groups of Chinese, a fast growing academic field until today.
The present English version was begun by Künstler himself before his untimely demise in 2007. However, it is not merely a translation of the Polish work, but a revised edition that introduces a shift in Sinological linguistics from a genetic to an areal description of Modern Chinese languages. A joint effort of the Polish linguist Alfred Franciszek Majewicz and the Sinologists Ewa Zajdler and Maria Kurpaska helped to bring the original manuscript to its completion. Thus, The Sinitic Languages is now finally accessible for a larger readership. Both amateurs and experts interested in this topic are invited to follow Künstler on his intellectual journey into Sinological linguistics.
Künstler intentionally excluded Chinese characters from his work because he viewed the Sinitic languages primarily as spoken languages. In order to provide readers with the opportunity to compare spoken and written language, the editors added an index with glossary to the English version.

“Overall, Künstler’s SL [Sinitic Languages] is an innovative, thought-provoking survey of the history and nature of the Sinitic language family from the earliest times to the end of the 20th century. It is a worthy successor to the achievements of the distinguished Polish sinologists Janusz Chmielewski (1916–1998) and Witold Jabłoński (1901–1957), both of whom were Künstler’s teachers. […] Now that it is available in English, I hope that sinologists and linguists outside of Poland will take advantage of this opportunity to become acquainted with a new way of looking at the Sinitic language family, one not burdened by misconceptions about the relationship between speech and script, between languages and topolects.”

Introduction to the English Version

Chapter 3: The Oldest Phase of the Chinese Language

Chapter 6: From the Han Dynasty to the Tang Dynasty

Chapter 7: The Middle or Ancient Chinese

Chapter 11: The Chinese Tower of Babel 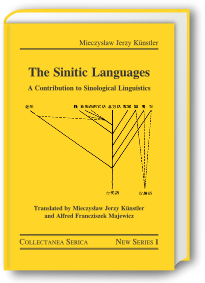