The Peking Temple of Eighteen Hells and Chinese Conceptions of Hell

The commentaries on both places, provided by Anne S. Goodrich&apos;s teacher and guide, Mr. Shih, a resident of the area, preserve much of the folk beliefs concerning the world of gods and ghosts. It is very fortunate that Mrs. Goodrich has been able to illustrate her description with numerous photographs generously supplied by Professor Robert des Rotours.

In the second part of her book she traces the origins of the Chinese ideas of Hell and gives a survey of Chinese descriptions of Hell, particularly those contained in stories of visits to Hell, and of the influence which the belief in an afterlife and in otherworldly punishment had on the practical conduct of people.


"Chinese Hells is indeed a valuable if belated contribution to sinology and to preserving a record of the folkways of old Peking as they persisted into the 1930s; furthermore, it and its earlier companion volume, The Peking Temple of the Eastern Peak, were clearly labors of love. Mrs. Goodrich poignantly observes that Peking was once a city of innumerable temples, large and small, but that many of those temples - among them the venerable little Temple of Eighteen Heils - now 'are gone forever, and with them a way of life'. " 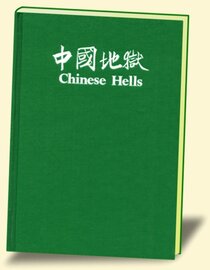