Transl. and annot. by CH'IEN HSING-HAI and L. CARRINGTON GOODRICH

... the Chinese version of this book first appeared more than forty years ago [in 1925 and 1927], it remains the most comprehensive and authoritative &apos;investigation into the Sinicization of people from the Western Regions in the Yuan period&apos;, Yuan Hsi-yü jen Hua-hua k’ao, which was its original title. Like other scholarly works by Professor Ch’en Yüan [1880-1971], this monograph is marked by thorough research and clear presentation. This however does not mean that it is easy to render it into English. Beginning with an introductory chapter, the book contains six chapters dealing in turn with the Confucian school, Buddhism and Taoism, literature, fine arts, customs, and women’s scholarship, followed by a chapter of conclusion. The coverage of so many aspects of Chinese culture and civilization and the involvement of divergent groups of western and central Asians make the translation of this monograph a Herculean task ...

Yang Lien-sheng in Journal of the American Oriental Society

The book at hand represents a formidable marshaling of facts about one of the most fascinating aspects of Chinese cultural history - the manner in which Chinese civilization absorbed alien elements ... this work contains a wealth of wonderful illustrative material for the cultural historian to mine and rework. Translating it demands knowledge of greatest breadth, and Professor Goodrich’s accumulation of historical knowledge serves him, and us, well. 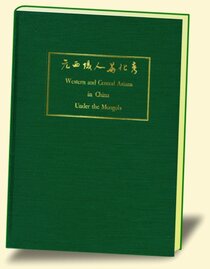