Home > PUBLICATIONS > Other Publications > The Peking Temple of the Eastern Peak

The Peking Temple of the Eastern Peak

The Tung-yüeh Miao in Peking is a veritable pantheon housing hundreds of deities with scores of attendants, presided over by the Great God of the Eastern Peak. Mrs. Goodrich, in her delightful narrative, relates the stories of these deities: how they came to be deified, how they secured the faith and trust of thousands of devotees, and how they managed to accomodate themselves to each other without interfering with the rights and responsibilities of the neighboring deities. Here is the story of how a faithful people, common fold, gradually built up a religious, syncretistic system happily free from any shackles of logic and historical accuracy. Yet it worked so well that the Chinese flocked to this temple at regular intervals. If there is a popular demand, a common need, a private hope or anxiety, there must be a deity who answers to it. If not, people will create such a deity and show that its worship is not useless and therefore justified.

Anne S. Goodrich lived in China for seven years, spending most of her time in Peking, but making trips that took her as far north as Jehol, and as far south as Changsha and Canton. In 1923 she married L. Carrington Goodrich. With her husband she has traveled extensively in Asia.

Janet R. Ten Broeck made detailed studies of the Tung-yüeh Miao, part of which she has published, together with Dr. Yiu Tung in T'oung Pao XL (1950-1951). She lived in Peking with her husband who for seven years (1920-1927) held a professorship at the Peking Union Medical College 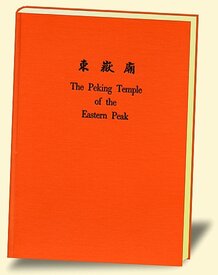