Preservation of Learning. With an Introduction on His Life and Thought

Yen Yüan [1635-1704] "... has an enduring place in the history of pre-modern Chinese thought. No one before him had so vigorously opposed the speculative Neo-Confucianism which dominated Chinese thought for several centuries, and no one had stressed practical experience so forcefully. These two aspects were well expressed in his Ts’un-hsüeh pien (Preservation of Learning), although his criticism of the Neo-Confucian concepts of human nature was more systematically expressed in his Ts’un-hsing pien (Preservation of Human Nature).

The publication of an English translation, especially a good translation, of the Ts’un-hsüeh pien will certainly contribute considerably to the scholarship of pre-modern Chinese thought. With the help by Professor Chi-chen Wang, Mr. Mansfield Freeman’s translation is not only very accurate ... but much more readable than the original text."

Harry Hsin-i Hsiao in Journal of the American Oriental Society 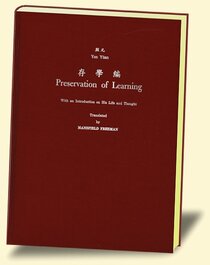