Forgive Us Our Sins

Confession in early modern Europe has been the subject of several studies. But what happened to the confessional practice when it moved to other cultures? This is the major research question of the present book as applied to late Ming and early Qing China.

The origin of this research can be traced back to the Handbook of Christianity in China: Volume One (635–1800) (Leiden 2000) compiled by researchers of the K.U. Leuven, in collaboration with an international team of circa twenty scholars. As a reference work, the Handbook comprehensively presents many different aspects of Christianity in China, including sciences, arts and crafts. But there was one major absentee: ritual, which is often considered essential for understanding China.

A first step in filling this gap was the organisation of an international workshop on “Chinese and Christian Rituality in Late Imperial China” (Leuven, June 2004). The present volume includes the revised contributions by Eugenio Menegon and Erik Zürcher and a reworked version of an article by Liam Brockey as well as the edition of the primary source he used for his article, a confessional manual composed by José Monteiro S.J. (1646–1720). These articles portray from different angles one of the sacramental rituals, viz. that of confession.

“The book should be of interest for Church historians and to historians of Asian theology and popular religiosity, particularly in China. It makes us aware of an area of Church history that is often ignored by the general scholars and shows the need for more research in ancient texts found mostly in archives and ancient libraries. We are grateful to the Institut Monumenta Serica for this model of mission research.”

EUGENIO MENEGON: Deliver Us from Evil: Confession and Salvation in Seventeenth- and Eighteenth-Century Chinese Catholicism

LIAM MATTHEW BROCKEY: Illuminating the Shades of Sin: The Society of Jesus and Confession in Seventeenth-Century China 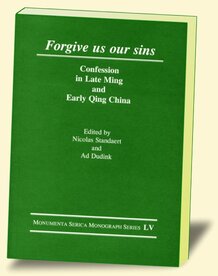