An Illustrated Life of Christ Presented to the Chinese Emperor

The History of Jincheng shuxiang (1640)

A renewed attention to visual culture is one of the recent developments in the study of cultural contacts between China and Europe in the seventeenth and eighteenth centuries. The subject of this book is the illustrated Life of Christ presented to the Chinese emperor in 1640 by the Jesuit missionary Johann Adam Schall von Bell S.J. (1592–1666). The origin of the work is a small parchment booklet with coloured miniature paintings based on a wide variety of prints by well-known European engravers (e.g., H. Goltzius, J. Stradanus). It was compiled in Munich in 1617 and a Chinese version with the title Jincheng shuxiang was published in Beijing more than twenty years later in a nicely illustrated edition.

“An Illustrated Life of Christ is a fascinating analysis of one of the earliest artistic encounters between Europe and China. … Standaert has, once again, demonstrated his scholarly foresight, workmanship and authority.”

John T.P. Lai in Journal of the History of Christianity in Modern China

This book is composed of two parts.

Part I traces the complex history of production of Jincheng shuxiang, from its European origin to its Chinese reception. It also analyses the illustrations and the text.

The book will be of interest to a broad range of scholars, from art historians of China and Europe to scholars interested in print history, and theologians. 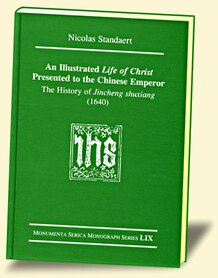