From China to Taiwan

More than 700 established Chinese folk religious temples on the island of Taiwan today give ample evidence of the fact that they are not strictly just Buddhist, Taoist, or Confucian, but rather a combination of these three religions plus other elements of a magico-religious nature, thus in practice blurring the line between the "sacred" and the "profane."

In her present study, the author ventures into the field of Chinese folk religion with a wider anthropological, historical, and sociological perspective, presenting its philosophical and religious content, domestic religious practices, the symbolism of gods and goddesses, and other related aspects.

Eleanor B. Morris Wu&apos;s study provides a starting-point for those interested in these fascinating and colourful facets of Chinese religions as they are lived and practiced in Taiwan today.

Introduction - Historical Parameters of Modern Taiwan in an Anthropological Context

From China to Taiwan. Agricultural, State, and Industrial Involution in a Lineage Context 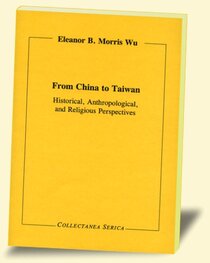