Conference on Paradigm Shift of Mohism and Its Encounter with Christianity

Zhang Chunyi is not a well-known participant in the academic landscape of 20th century China. Probably his name is best known in the context of the Mahāyāna interpretation of Christianity, i.e., his project of “Buddhicizing Christianity” (fohua jidujiao 佛化基督教). As to Mohism, Zhang Chunyi published three books in the years 1922-1923. At the end of the 1930s, he published another book on Mozi and revised his previous work Mozi jiangu jian 墨子間詁箋. In the present article the author will concentrate on Zhang's Moxue yu Jingjiao 墨學與景教. This slim book, comprising altogether 65 pages, is principally divided into two chapters: the first (jia 甲), “Biao zong” 標宗 (Elucidating the Origin) and the second chapter (yi 乙), “Lijiao” 立教 (Instruction towards Establishing the Doctrine), which are both sub-divided into many smaller or larger sections. Although the author will concentrate on the core similarities between Mohism and Christianity as seen by Zhang Chunyi, Zhang also pointed out a basic difference between Mohism and Christianity which lies in the objective targets of Mozi and Jesus: Mozi was concerned with reforms of serious deficits he had discovered in human society and his goal was to effect economic wealth and material prosperity. Jesus was, however, caring about every human heart and its radical change towards God in view of His promise to grant every human being eternal life so that the sick and chaotic human world and the whole cosmos would become the Kingdom of God. Thus, Jesus’ direct religious teaching was much more profound than the socio-political ambitions of Mozi. Of course, Zhang Chunyi did not forget to mention that Christianity does not reach the subtleties of Buddhism, which he does not treat in his book. 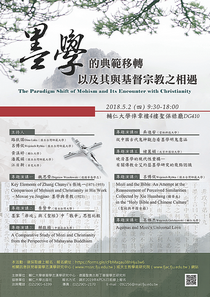