He passed away on 29 November at the age of 68 in the hospital of Grudziądz, Poland.

The funeral service was held on 2 December at 11 a.m. in the mission house of the S.V.D. missionaries in Górna Grupa, Poland.

Fr. Roman Malek, was born in Bytów (Kashubia, Poland) on 3 October 1951. He entered the Society of the Divine Word (S.V.D.) in 1969. He moved to the S.V.D. Mission house at Sankt Augustin in 1976 to pursue a degree in Sinology, Japanology, Comparative religious studies and Church history at the nearby University of Bonn. He finished his studies in 1984 receiving a doctoral degree in Sinology.
In 1992 he was appointed Director of the Monumenta Serica Institute and Editor-in-chief of its publications. Under his aegis 20 volumes of the journal Monumenta Serica were published as well as 75 titles of the monograph series. In the name of the Monumenta Serica Institute he organised numerous exhibitions and international conferences. Furthermore, he published extensively in his fields of expertise and was a Visiting professor at several universities in Europe. In addition to being Director of the Monumenta Serica Institute, from 1988 to 1998 he also held the position of Director of the China-Zentrum, Sankt Augustin, a German Catholic organization.
In 1998, Fr. Malek was appointed Professor of the History of Religions at the Philosophical-Theological Faculty S.V.D., St. Augustin. After completing his post-doctoral work (Habilitationsschrift) at the University of Bonn in 2003, he was engaged as a lecturer for Sinology there.
In April 2011 he suffered a severe stroke, which abruptly put the brake on many of his creative activities. Despite his physical limitations, he continued to work on several book projects, among them two supplementary volumes of the book series The Chinese Face of Jesus Christ, vols. 4a and 4b, published in 2015 and 2019, respectively.
In recognition of his efforts for the Church in China Fr. Malek was awarded the prize "Heart without borders" of the Polish Cardinal-Adam-Kozłowiecki Foundation in June 2016.
On the occasion of his 65th birthday in October 2016 Fr. Malek was presented with a two volume Festschrift entitled Rooted in Hope: China – Religion –Christianity in an official ceremony in Sankt Augustin.
After having lived in Sankt Augustin for more than four decades, in April 2018 he moved to the S.V.D. mission house in Górna Grupa in his native Poland where he passed away after a short illness on 29 November 2019. 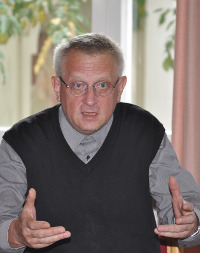