China is in the Eye of the Beholder

The Monumenta Serica Institute (Sankt Augustin, Germany) and the Monumenta Serica Sinological Research Center (Taipei, Taiwan) hosted an international workshop on the state of the fields of Sinology, Chinese/China Studies, and guoxue in Siegburg, Germany, from 21 to 22 October 2019. 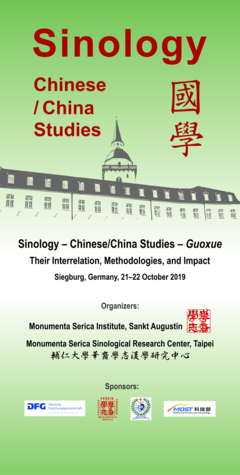 Seventeen scholars from Germany, Taiwan, Hong Kong, the PR China, the United Kingdom, Sweden and the USA joined the international Workshop “Sinology – Chinese/China Studies – Guoxue: Their Interrelation, Methodologies, and Impact” held at the Catholic-Social Institute in Siegburg, Germany from 21–22 October. The workshop was organized by the Monumenta Serica Institute (Sankt Augustin, Germany) and the Monumenta Serica Sinological Research Center (Taipei, Taiwan) and offered a forum for an exchange between different approaches in research on China – whether this be the philological Sinology, Chinese/China studies which are rooted in the social sciences, or the cultural political project of Guoxue (National studies) – as well as for the discussion of current trends and challenges in the field.

The first panel introduced the Sinological approach: Victor Mair (University of Pennsylvania, Philadelphia, USA) made a strong case for a classical understanding of Sinology as a philology focusing on the analysis of pre-modern texts: To Mair, Sinology can make a significant contribution to the academic discourse by recovering evidence of early cultural exchanges between East and West. This could serve to counter the misperception of China as a monolithic, isolated entity or “closed box,” a long-time scholarly pursuit of Mair. Sinology as a discipline greatly benefits from the advanced technological tools offered by the digital humanities. Tseng Shu-hsien, director of the National Central Library (NCL) Taiwan, gave an in-depth introduction to the projects of the NCL. Her presentation provided information on various databases for researching classical Chinese texts. Pan Feng-chuan (National Taiwan Normal University, Taipei) took missionary Sinology as point of departure to reflect upon the general function of Sinology. Pan addressed both the critique of Sinology as “pseudo-science” by Hans Kuijper as well as Mizoguchi Yūzō’s approach of taking “China as the method.” As Pan pointed out, a rather strong current in Western academic discourse is taking Sinology as a mirror to perceive one’s own culture from an outsider’s perspective, an approach proposed in recent times, e.g., by François Jullien and Nicolas Standaert.

China as perceived from a “Chinese studies” point of view was presented in the second Panel. Thoralf Klein (Loughborough University, UK) traced the development of studies on the Hakka as a transdisciplinary research field. Adopting an archaeology of knowledge approach, Klein ventured from modern research on Hakka via missionary reports to the genealogies of Hakka families to demonstrate the interrelation between records, research, and the construction of ethnic identities. The Hakka pose an interesting case of multiple identities, being part of the ethnical majority of Han-Chinese while at the same time having distinct settlements, a unique culture and a long history of migration that created a global Hakka identity. The lecture by Helwig Schmidt-Glintzer (China Centrum Tübingen, Germany) emphasized the interdependence between the different approaches to China: the task of Sinology is to make Chinese history accessible via textual studies, Chinese studies critically reflect upon modern China, while guoxue are an inner-Chinese project of re-constructing a cultural identity of China. Ravni Thakur (Delhi University) contributed an overview on the history of Chinese studies in India and the research fields of Indian Universities. Due to the long-time political rivalry between India and the PR China, Indian research until today focuses on the aspects of foreign and security policy. Ren Dayuan (Beijing Foreign Studies University) outlined the history of early Sinology in “The Rise of European Academic Sinology and Its Influence on Post-19th century Sinology.”

At the close of the first day, the evening talk on “Facing Guoxue, Cultural Nationalism and Chinese Exceptionalism: Some New Challenges for Contemporary ‘Western’ Sinology” by Christian Soffel (Trier University, Germany) sparked a lively discussion about the political context and parameters of research on China. As can be observed, there are rather close connections between prominent Confucian intellectuals and the political leadership in the PR China. This leads to the instrumentalisation of Confucianism in discourses against “universal Western values” in the PR China as well as in the project of creating a new national self-confidence. Soffel advocated staying aware of this problematic situation and not withholding appropriate criticism while at the same time being self-critical about one’s own biases and maintaining an open-minded dialogue with Chinese colleagues.

The second day of the workshop with the third and fourth panel was mainly dedicated to the topic of Guoxue, a Chinese concept for research on one’s own culture. It became obvious in the following papers and discussion that this concept has a history of its own and is highly controversial.
In his paper, which was read by Philip Clart (Universität Leipzig), Peter Zarrow (University of Connecticut, Storrs, USA) explained that Guoxue emerged in late 19th century in the context of resistance against the foreign Manju rule of the Qing dynasty and can be seen as a quest for national heritage. In today’s China the vigorous return to one’s history, in particular the imperial tradition is also manifest in the museum boom – more than 2,000 museums have been built since the 1990s. Celine Lai (Peking University) showed the different approaches of Sinology and Guoxue in the field of archaeology by analyzing two academic studies on a recently discovered version of the Cangjie pian, a proto-dictionary now in the possession of Peking University. Hu Lung-Lung (Dalarna University, Falun) proposed the idea of transdisciplinarity in Guoxue, combining the perspectives and methods of the disciplines of law and literature. He emphasized that the original notion of Guoxue was imbued with the sense of interdisciplinarity because it included all traditional Chinese fields of knowledge.
Patricia Sieber (Ohio State University, Columbus, USA) focused on the importance of translation studies in Sinology. As scholars on China have a great impact through their translations, she proposed to establish a typology of translation practices using the example of translations of the Chinese song-drama into European languages in the last two hundred and fifty years. Huang Meiting (Monumenta Serica Sinological Research Center, Taipei) advocated for replacing the concept of Sinology that denotes a certain phase in Sino-western cultural exchange with the concepts of Chinese Studies and Guoxue to stress the multidisciplinarity of studies on China. This broader notion has already been established in Taiwan. The interpretation of the 64 hexagrams of the Yijing (Book of Changes) by reformist and revolutionary Chinese intellectuals in the early 20th century debate about the founding of a Chinese nation-state was the topic of Hon Tze-ki’s (City University of Hong Kong) paper. He showed how the Yijing became a classic for the young Chinese republic as the sequence of hexagrams was taken to predict the ideal Chinese nation-state.

An evening program in Sankt Augustin made the successful workshop complete. After being treated to a performance of French and Italian compositions for harp (Laura Oetzel) and flute (Klemens Salz) in the ethnological Museum Haus Völker und Kulturen, the participants visited an exhibition on Ars Sacra Pekinensis, a 20th century school of Chinese Christian art, guided by the museum director Jerzy Skrabania SVD. This cultural event concluded with a visit to the Monumenta Serica Institute and its library.

The lively discussions during the conference showed that the topic “Sinology – Chinese/China Studies – Guoxue” was well chosen indeed. Debates on the self-understanding of the discipline proved to be more important than ever given the rising impact of China in the world. 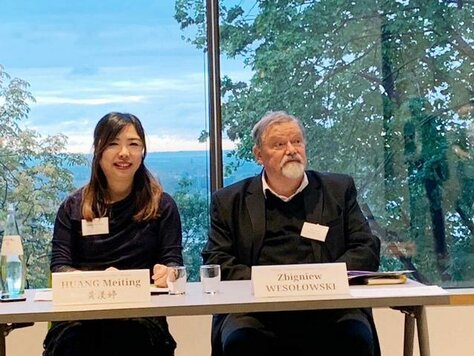 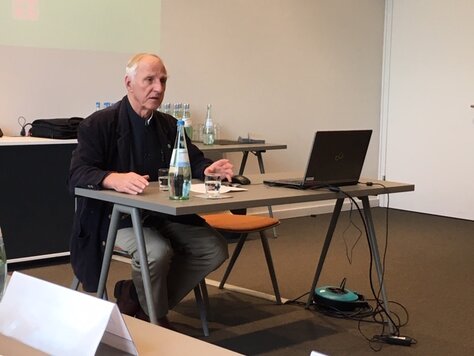 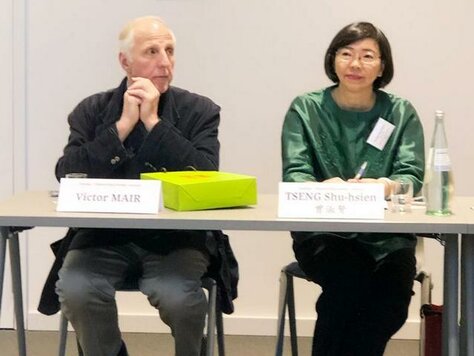 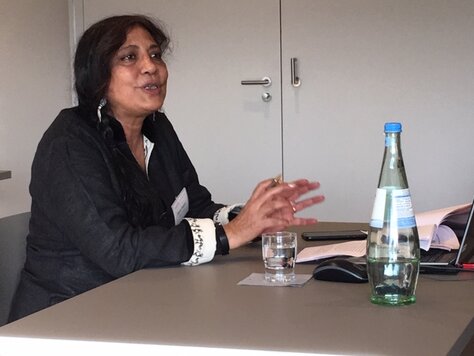 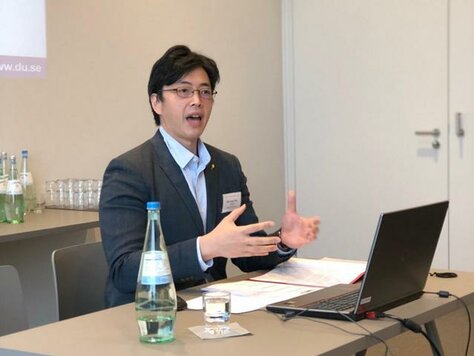 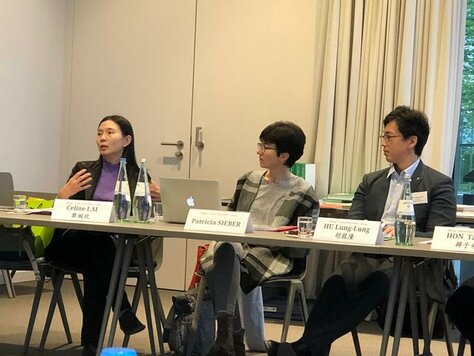 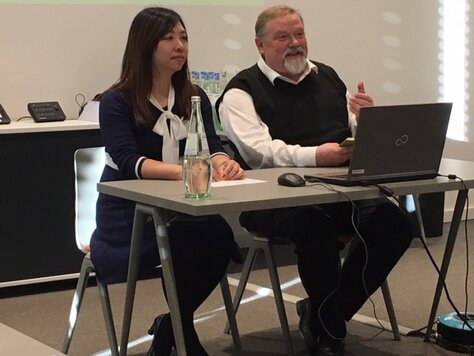 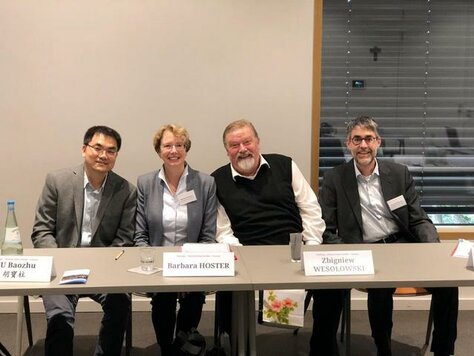