Song Gang, author of a recently published monograph on an important work of Ming dynasty Christian literature and Associate Professor of Chinese History at Hong Kong University, gave a Book Talk in the

Professor Song’s study deals with the Kouduo richao (Diary of Oral Admonitions, 1630–1640), a work that records the dialogic exchanges between the Italian Jesuit Giulio Aleni (1582–1649) and other Jesuits as well as Chinese Christian converts in Fujian province. By offering the new approach of dialogic hybridization, the author not only treats dialogue as an important yet underestimated genre in late Ming Christian literature, but it also uncovers a self–other identity complex in the dialogic exchanges of the Jesuits and Chinese scholars. 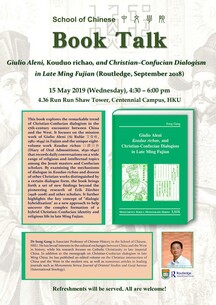