The Peking Temple of the Eastern Peak. The Tung-yüeh Miao and Its Lore by Anne Swann Goodrich, an important monograph on a Chinese religious site in Beijing, published by the Monumenta Serica Institute in Nagoya in 1964, was recently translated into Chinese as Dongyue miao (Zhongwen ban) 东岳庙 (中文版).

The first edition of this translation appeared in December 2018, in February this year the book already saw its second printing, a fact that suggests the great popularity of the topic with Chinese readers. The illustrated study provides a description of the cult of the main deity of the temple, the Great Ruler of the Eastern Peak, or Taishan, a mount massif in Shandong province. It also offers detailed descriptions of the temple buildings and the pantheon of other popular deities worshipped there.

The author Anne Swann Goodrich (1895–2005) came to China in 1920 as a missionary under the American Board of Foreign Missions. During her stay she met her future husband, the American Sinologist Luther Carrington Goodrich, who later became an eminent professor of Chinese at Columbia University (New York). While residing in Beijing with her family from 1930–1932 she pursued her personal studies of Chinese popular religion with the help of her Chinese language teacher. Her book on the Dongyue miao is a valuable document of religious life in China in the Republican period as it provides first-hand information about the actual practice of the so-called folk religion from the perspective of ordinary people. Though Anne Swann Goodrich did not attempt to present a learned discussion of Chinese religion, she supplements her teacher’s account with Sinological sources.

The Chinese translation of her book on the Dongyue miao includes two color photos of the author in her twilight years and an English preface by two of her five children, Anne Goodrich Jones and Hubbard Carrington Goodrich (pp. vi-vii). All twenty black and white plates of the original, including two maps, are contained in the translated work, albeit in a lesser quality. The appendix by Janet R. Ten Broeck, “Description of the Tung-yüeh Miao of Peking in 1927” also appears in a Chinese translation. Contrary to the English original, the book does not provide an index.

The translator Li Jinping, who works at the Beijing Folklore Museum located in the Dongyue miao, has announced her plan to translate another book by Anne Swann Goodrich on Chinese Daoism, Chinese Hells. The Peking Temple of Eighteen Hells and Chinese Conceptions of Hell into Chinese. This book deals with a smaller temple formerly situated opposite the Dongyue miao, the Shiba diyu miao 十八地獄廟 and was also published by the Monumenta Serica Institute (Sankt Augustin, 1981). 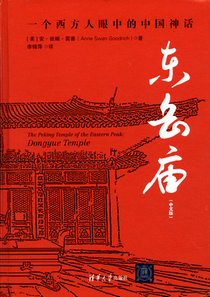 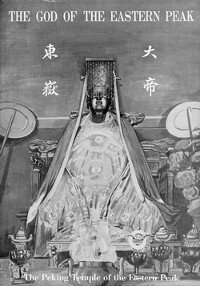