The Chinese Face of Jesus Christ - Vol. 4b

The present work marks the completion of an interdisciplinary book project that explores the manifold faces and images of Jesus Christ in China from the perspectives of Sinology, mission history, theology, and art history. Initiated seventeen years ago by the former Director and Editor-in-chief of the Monumenta Serica Institute, Roman Malek, the collection The Chinese Face of Jesus Christ comprises six volumes now.

This final text volume 4b features a “Supplementary Anthology” presenting excerpts and longer quotations on Jesus Christ from translations, prayers, poems, and scholarly articles in several languages (175 pp.). The core of the book is a “General Index and Glossary” (93 pp.) that gives readers access to the wealth of materials collected in all six volumes, together almost two thousand pages of text. The “Addenda” include two sections that provide short biographical information on contributors and authors of the anthologies of the present and previous volumes, a list of the more than fifty reviews published on the previous volumes as well as all “Tables of Contents” and a list of “Errata and Corrigenda.”

The collection The Chinese Face of Jesus Christ bears witness to the encounter of two cultural systems, China and Christianity. The history of this encounter has proven to be one of a clash of cultures, but also one of mutual enrichment. It is hoped that the collection as a whole as well as the present volume will continue to inspire research on the contextualization of Christianity in China.

Overall, Roman Malek’s diligence, perseverance, and scholarly fruits are praiseworthy. As a Polish scholar who earned his PhD from a German university and then worked there for decades on the Christian enterprise in China, his personal odyssey itself is a legend. His contributions in publishing The Chinese Face of Jesus Christ must be acknowledged. Fortuitously, this series has already been widely cited as an important source in exploring the Chinese interpretation of Jesus Christ. [...] In contrast to the previous volumes, volumes 4a and 4b retain a special feature as they offer a bibliography and similar information, which could benefit professional researchers in their scholarly pursuit. Like the previous volumes, the supplementary anthology in volume 4b will fascinate the general reader. Irrefutably, scholars will find these two books well organized, informative, and serviceable to their continual exploration into the Chinese face of Jesus Christ.

The overall outcome of this final volume is to turn the whole series into a miniature encyclopaedia of Christ in China that up to a point can serve also as an encyclopaedia of Chinese Christianity. For all the additional assistance that this project has attracted, especially over its latter years, it is clear that its conception and execution would not have been possible without the vision and initiative of a single individual. There could be no more fitting memorial to Roman Malek’s life of dedicated scholarship.

T.H. Barrett in Bulletin of the School of Oriental and African Studies

Introduction
Supplementary Anthology
Addenda:
Notes on Contributors, vols. 1-3b
Notes on Authors of the Anthologies, vols. 1-3b, 4b
List of Reviews of The Chinese Face of Jesus Christ, vols. 1-4a
Tables of Contents, vols. 1-4a
Errata and Corrigenda, vols. 1-4a
General Index with Glossary 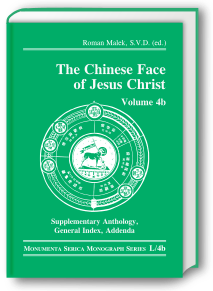