The "Great Plan" ("Hung fan") chapter of the Book of Documents (Shu ching) is a major source of Confucian political, cosmological, and social theory in early China.

In her study of the "Great Plan" and its major commentaries, Michael Nylan explores the exegetical tradition of this significant text, thus following the "shifting center" of Chinese orthodoxy.

The first chapter attempts to reconstruct the original message of the "Plan", its concern with the unification of the state and its focus on techniques for maximizing the ruler’s power. The second chapter examines the interpretive changes which accompanied the elevation of the "Plan" from administrative manual to canonical status in the Western Han (206 B.C. - A.D. 8), when it became one of the cornerstones of the Yin-yang Five Agents theory. The third chapter demonstrates still another shift in the center of Chinese orthodoxy in eleventh century Sung China. The appendix reviews scholarly efforts to date the "Plan," concluding with the author’s own tentative proposal of the date for the work.

"As a study that places the interpretation of one of the most influential of the Documents in historical context and contrasts periods and authors, The Shifting Center is a welcome addition to the study of the meaning of the Classics in Chinese history. This book invites us to reflect upon ways in which commentaries on the Classics simultaneously reflected particular interests and contributed to the transformation and redefinition of those interests." 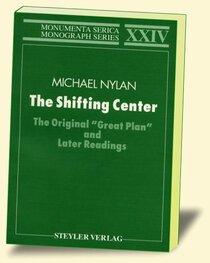