The Bible in China

"Zetzsche was extremely assidious in archival work in Europe, North America, Hong Kong, Taiwan and China, and makes fine use of detailed and primary documentation. This rich basis of information, and the extensive appendices and bibliography, along with the use of Chinese characters both in text and footnotes, makes this book a reference work for this topic over the last two centuries. ... In short, this is a fine work ... with a wealth of information on many aspects of the Protestant presence in China since 1807. It will be a valuable addition to all China studies libraries."

The Union Version, China's preeminent and most widely used translation of the Bible, had achieved the status of a sacred Chinese classic within the Chinese Church not long after its publication in 1919.

Jost Zetzsche's monograph on this remarkable translation traces the historical and linguistic background that led to the decision to translate the Union Version, with detailed analyses of the translation efforts that preceeded it.

Special attention is given to the cooperation and confrontation among Protestant denominations as well as the rising prominence of the Chinese translators as these groups attempted to form a cohesive translation of the Bible. This is set against the background of the development of the Chinese language during the 30-year translation process, both in the perception of the translators and in the country at large. 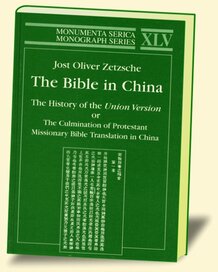