In his Astronomia Europaea, published 1687 in Dillingen, Ferdinand Verbiest (1623-1688), coryphée of the Jesuit Mission in China, describes concisely yet detailed how European astronomy, namely the European way to calculate the Chinese calendar and to predict lunar and solar eclipses, succeeded in resuming its former position after the persecution under the Oboi regency (1661-1669).

In the second part, Verbiest reports on the achievements of the Jesuits in fourteen distinct mathematical and mechanical sciences (gnomonics, ballistics, hydragogics, mechanics, optics, catoptrics, perspective, statics, hydrostatics, hydraulics, pneumatics, music, horologic technology, meteorology) during the decisive decade, 1669-1679, when a strong base was laid for the revival and the flowering of the Jesuit Mission.

This edition of the Astronomia Europaea presents: a photostatic reprint of the rare original edition; an English translation, annotated from contemporary first-hand and mostly unpublished documents, situating this treatise in its Chinese context and explaining it against its European and particular Jesuit background. An extensive introduction describes its complex growth process and defines its relation to the previous astronomical treatises of the same author between 1669 and 1678, both in Chinese and in Latin, including the recently discovered Compendium Historicum and Mechanica.

"The book is without doubt a key source for research on the self-understanding of the Jesuit missionaries. ... Golvers’ work is of a high scholarly standard. It reproduces the full original text in Latin, presents a translation and extensive notes, not to mention the more than fifty pages of illustrations, a bi- bliography, and an index. The translator is a Latinist and treats his subject with all the exactness of a serious textual critic. He has even included a list of Latin neologisms." 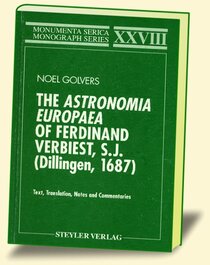