A Look at Home Worship

Paper gods are thin pieces of paper on which the image of diverse deities of the Chinese pantheon has been printed, usually by carved wooden blocks. In North China commonly known as "paper horses" (chih-ma), these prints form an important part of Chinese popular religious cults. Widely spread among the population, from peasants to high officials, they were hung in homes, shops and places of work as a protection against evil spirits. The prints were also burnt as a means of transporting the deity represented to heaven.

Anne S. Goodrich has collected a large number of those "paper horses" during the years she spent in Peking in the 1930s. The book presents numerous specimens of her unique collection in black-and-white illustrations, arranged according to the different types of gods, among them Gods of Wealth (Ts'ai-shen), Gods of Medicine, Patron Deities, and Household Gods. The prints show deities worshiped in Chinese popular beliefs as well as Taoist and Buddhist deities. The author analyses each print, its symbolism and iconography, and gives a detailed explanation of the specific deity's significance and the rituals and festivals connected with this deity.

"There can be no question as to the necessity of this work to all who would understand an aspect of popular mentality as it existed until recent years in Chinese cities, perhaps still survives there, and certainly must persist in country places ... Not often does a work on Chinese art lend itself so irresistibly to browsing."

William Watson in Journal of the Royal Asiatic Society 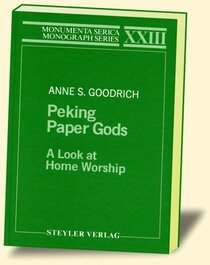