Leibniz and Wolff on China

Eighteenth-century Europe, commonly referred to as the Age of Enlightenment, witnessed a growing interest in China on the part of many great thinkers, inspired by reports of the Jesuit missionaries.

The German philosophers Gottfried Wilhelm Leibniz (1646-1716) and Christian Wolff (1679-1754) were among the admirers of Chinese thought and civilization. Leibniz’ contribution to the Western understanding of China was mainly metaphysical and religious. His younger contemporary and friend Wolff focused on Chinese ethics, concentrating on the practical morality and political ideals of Confucius.

Julia Ching and Willard G. Oxtoby present English translations of important texts related to China by Leibniz and Wolff, accompanied by two introductory essays on the philosophical and historical context. The epilogue sketches the reversal of the European opinion on China in the succeeding centuries, as reflected in the writings of Kant and Hegel.

"There is no doubt that Ching and Oxtoby have made tremendously important material accessible to the English-speaking world through their translations and introductions to the Chinese influence on the two German philosophers."

An Explanation of Binary Arithmetic (1703)

Discourse on the Natural Theology of the Chinese: Letter to Nicolas Rémond (1716)

Discourse on the Practical Philosophy of the Chinese (1721) 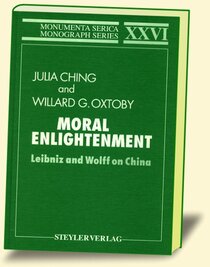