Translated, with Introduction and Notes by ERIK ZÜRCHER

The Diary of Oral Admonitions (Kouduo richao) is an invaluable mirror of early Chinese Christianity, as it stands out as the only source that allows a glimpse of Jesuit missionary practice in China on a local level – “accommodation in action” – and of the various responses of the Chinese audience, both converts and interested outsiders. It is a compilation of some five hundred notes “about everything” made by Li Jiubiao 李九標 and other Christian literati during their conversations with Jesuit missionaries in Fujian between 1630 and 1640. These notes are arranged in chronological order and divided into eight books.

The most important Western protagonist in the Diary is the Italian Jesuit Giulio Aleni (1589–1642), called “Master Ai (Rulüe 艾儒略)” in Chinese. The present study and translation of the Diary of Oral Admonitions can be seen as a companion volume to the proceedings of an international conference that was held on Aleni in his native place Brescia in 1994, also published in the Monumenta Serica Monograph Series XLII: “Scholar from the West.” Giulio Aleni S.J. (1582–1649) and the Dialogue between China and Christianity, 1997.

The present work in two volumes is meant to be a tool for further research. Volume 1 presents a comprehensive introduction to the Diary and its historical context, followed by the annotated translation, both by Erik Zürcher (Leiden), a renown specialist for the study of Christianity in China. It is enhanced by illustrations, partly in colour, and maps. Volume 2 includes a facsimile of the Chinese text (reproducing a copy held in the Roman Archives of the Society of Jesus), a bibliography of Chinese and Western sources as well as secondary literature, and an analytical index with glossary that will enable the reader to trace specific data in the text.

"The present edition, carefully translated and annotated by the late Erik Zürcher, Professor Emeritus of Sinology at Leiden University, represents an invaluable contribution to scholarship. ... We are all indebted to Monumenta Serica and to the translator for bringing out this handsome edition, with full introduction, notes, translation, reproduction of the original Chinese text, as well as a full scholarly apparatus."

VIII. Social Aspects (162)
Tension and Conflict (162); Gender Relations: Marriage and the Prohibition of Concubinage (164); Social Inequality: In Praise of Poverty (167) 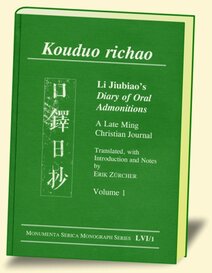 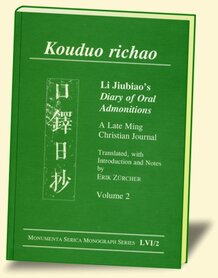