This bibliography lists primary and secondary works on Islam in traditional China, concentrating on two main topics: Muslims and Islam in China; mutual knowledge by Muslims (both inside and outside China) of China and non-Muslim Chinese of Islam and Muslims (both inside and outside China). The main items are provided with subheadings and short annotations and are evaluated by the authors.

Donald Daniel Leslie has previously published a comprehensive bibliography on Jews and Judaism in Traditional China in the Monumenta Serica Monograph Series (vol. 44, 1998).

"Scholars of China, and particulary those working in the growing field of Chinese Islam, have just been awarded with a priceless contribution that will undoubtedly reshape their future work, Islam in Trditional China: A Bibliographical Guide. With this work, Donald Leslie, one of the work&apos;s three compilers, deepens his already vast contribution to the field."

Part I
Introduction
I.1. A Short History
I.2. Introduction to the Sources
I.3. Library Holdings and Archives 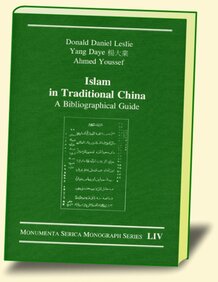