Home > PUBLICATIONS > MS Monographs > Believing in Ghosts and Spirits: The Concept of Gui in Ancient China

Believing in Ghosts and Spirits: The Concept of Gui in Ancient China

The present book by Hu Baozhu explores the subject of ghosts and spirits, thus mapping the religious landscape of ancient China. The main focus is on the character gui 鬼, an essential key to the understanding of spiritual beings there. The author analyses the character gui in various materials – lexicons and dictionaries, excavated manuscripts and inscriptions, and received classical texts. Gui is examined from the perspective of its linguistic root, literary interpretation, ritual practices, sociopolitical implication, and cosmological thinking.

The Shuowen jiezi’s interpretation of gui as a sort of negative force tending to harm people’s properties or even their lives greatly influenced later understandings of the concept. In addition to early lexicons, the present study also traces the understanding of gui in oracle bone script (jiaguwen) and bronze script (jinwen) where gui chiefly referred to concrete persons, groups or places, seen as remote, foreign, vigorous or malevolent, and then to ghosts/spirits of the dead. Linguistically the compound phrase guishen came later to denote all spiritual beings. The book further investigates essential layers of meaning of gui and its literary functions as a part of speech in some Chinese classics, the Zuozhuan, Liji, Lunyu, Zhuangzi and Mozi as well as in popular traditions, namely the Rishu (Day Book) unearthed in 1975.

In the gradual process of coming to know the otherworld in terms of ghosts and spirits, Chinese people in ancient times attempted to identify and classify these spiritual entities. In their philosophical thinking, they uniquely connected the subject of gui with the movement of the universe. Thus the belief in ghosts and spirits in ancient China appeared to be a moral standard for all, not only providing a room for individual religiosity but also implementing the purpose of family-oriented social order, the legitimization of political operations, and the under-standing of the way of Heaven and Earth.

Chapter 1: The Preliminary Understanding of Gui

Chapter 2: The Original Meaning of the Character Gui: An Examination of Jiaguwen and Jinwen

Chapter 3: What’s in a Character? Definition and Variegated Characteristics of Gui in the Zuozhuan and Liji

Chapter 4: Confucian, Daoist, and Mohist Perspectives on the Concept of Gui

Chapter 5: Folk-oriented Usages of Gui in the Rishu Manuscript

Appendix I: Table of the Radical Gui and Its Related Characters 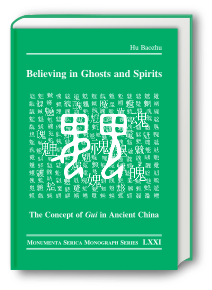