“… this is a very stimulating collection of articles organised around different topics that are all related to the fascinating sphere of Sino-Western contacts. A variety of perspectives are analysed, both Chinese and western views are addressed, as are the ‘views of the views’, or, more generally, their perception within modern scholarly contexts. In that sense Encounters and Dialogues moves from the ‘purely factual’ to the ‘mental’, and from the various micro-scenarios to a broader, at times indeed eye-opening, agenda.”

Roderich Ptak in Journal of the Royal Asiatic Society

This volume includes selected papers (in English and Chinese) from an international conference held in Beijing in 2001, the year that marked the 400th anniversary of Matteo Ricci’s arrival in Beijing. The conference was jointly sponsored by the Ricci Institute for Chinese Western Cultural History at the University of San Francisco and the Institute of World Religions at the Chinese Academy of Social Sciences in Beijing.

I. Diplomacy, Trade and Mission before 1800

TIMOTHY BROOK: The Early Jesuits and the Late Ming Border: The Chinese Search for Accommodation

ZHANG TINGMAO: On the Proliferation of Macau’s Maritime Trade and Commodities System in the Late Eighteenth Century

ANTÓNIO VASCONCELOS DE SALDANHA: Priests or Fidalgos? The Portuguese Official Discussion on the Nature of Diplomatic Envoys to China in the Eighteenth Century

JOHN W. WITEK, S.J.: The Emergence of a Christian Community in Beijing During the Late Ming and Early Qing Period

ZHANG XIANQING: On the Contact Between Lineage Society and Catholicism During the Late Ming and Early Qing Period

XU HAISONG: The Eastward Spread of Western Learning and the Eastern Zhejiang School in the Qing Dynasty

LIN JINSHUI: The Function of Poetry in Recording Events and Verifying History: Jesuit Activities in Fujian from the Mirror of Poems to Giulio Aleni by Fujian Scholars

HAN QI: The Directorate of Astronomy in the Chinese Rites Controversy

CATHERINE JAMI: For Whose Greater Glory? Jesuit Strategies and Science During the Kangxi Reign (1662–1722)

SHEN DINGPING: The Identity, Difference and Reciprocity of Chinese and Western Cultures Seen from Arguments by Western Scholars

NICOLAS STANDAERT, S.J.: The Construction of a Christian History in China

JEAN-PAUL WIEST: A Tale of Two Cities: The Jesuits’ Scientific and Educational Work in Beijing and Shanghai 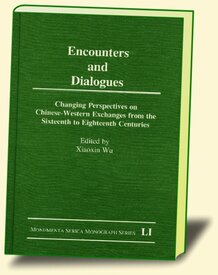