When in 1775 the scholar Wang Xihou 王錫侯 compiled a dictionary called Ziguan 字貫, he wrote, for illustrative purposes, the personal names of Confucius and the three emperors Kangxi, Yongzheng and Qianlong in the introduction. In oversight, he recorded their complete names. This accidental writing of a few names was condemned by Emperor Qianlong as an unprecedented crime, rebellion and high treason. Wang Xihou was executed, his property confiscated and his books were burnt. His family was arrested and his sons and grandsons were killed or sent as slaves to Heilongjiang.

It is surprising what an enormous impact the tabooing of names (bihui 避諱) had on Chinese culture. The names of sovereigns, ancestors, officials, teachers, and even friends were all considered taboo, in other words it was prohibited to pronounce them or to record them in writing. In numerous cases characters identical or similar in writing or pronunciation were often avoided as well. The tabooing of names was observed in the family and on the street, in the office and in the emperor’s palace. The practice of bihui had serious consequences for the daily lives of the Chinese and for Chinese historiography. People even avoided certain places and things, and refused to accept offices. They were punished and sometimes even killed in connection with the tabooing of names. The bihui custom existed as an important element of Chinese culture and was perceived as significant by Chinese and foreigners alike. It was crucial for implementing social values and demonstrating the political hierarchy.

The present work A Good Son Is Sad if He Hears the Name of His Father is a systematic study of Chinese name-tabooing customs, which until now have been relatively little explored in Western-language Sinological studies. It attempts to provide a long-term perspective on the changing dynamics of tabooing and elucidates various aspects related to the fascinating topic of tabooing of names.

“Piotr Adamek’s doctoral dissertation is a meticulous study on the tabooing of names in the history of Chinese culture. The scope of his study is impressively broad. […] Due to its clear structure, the fundamental role of the sources it discusses for developing an understanding of Chinese culture, and its coherent exposition of arguments, the book can be highly recommended to students of Sinology.” 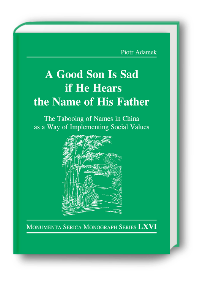