This book constitutes a pioneering and comprehensive text-in-context study of the translation of Christian tracts (from English into Chinese) by Protestant missionaries in nineteenth-century China. It focuses on the large body of hitherto widely neglected Protestant Chinese books and tracts, putting the translated texts into their socio-political, cultural and ideological contexts. This integrated approach proves to be fruitful and insightful in describing and explain¬ing actual practices of translation, or translation norms. The book addresses the central issue of how original texts were selected, translated and presented by Protestant missionaries under the patronage of various missionary institutions in order to achieve their specific agendas.
Based on primary materials and rare archival documents, this extensive survey of the corpus of Chinese Christian literature fills a significant gap in the evaluation of Protestant missions to China, especially with regard to the role of the Religious Tract Society (RTS). Moreover, the contributions of Chinese collaborators are examined in detail to achieve a more balanced view in accessing the role of missionary translators. The book also sheds light on the sophisticated procedures and strategies of cross-cultural translation, particularly on the facet of religious translation in the Chinese translation tradition.

“… John T.P. Lai provides a wealth of information about the development of Protestant religious publishing in late imperial China. Full of interesting data and illustrations, this work should find an audience with church historians and mission scholars.” 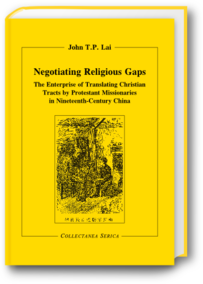