Polyglot from the Far Side of the Moon

Though recognized in the latter part of the 19th century as “the greatest Orientalist in Britain,” the Geneva-born Anglican priest, Solomon Caesar Malan (1812–1894) was such an extraordinary person that he has defied any scholarly person to write a critical account of his life and works. Consequently, almost no one has written anything critically appreciative and insightful about him since his death.
A polymath with extraordinary talent for languages and sketching, among other specialized skills, Malan focused much of his life on assessing biblical translations in ancient Middle Eastern and East Asian languages, while also producing English translations of alternative expressions of Christianity found in north Africa, the Middle East, and Asia. A life-long interest of his was comparing the proverbs of his name-sake, King Solomon, with proverbial wisdom from as many cultures and languages as he could find. That interest culminated in the three-volume work Original Notes on the Book of Proverbs that enshrined his achievements realized through his capacities as a hyperpolyglot within the context of a search for shared wisdom across many cultures.

THOMAS ZIMMER: Solomon Caesar Malan’s Understanding of Chinese Sayings and Proverbial Wisdom: A Preliminary Study of His Art and Technique of Translation

RITA KUZDER: Initiating the Discovery of Tibetan Wisdom in the Original Notes on the Book of Proverbs

GYULA PACZOLAY and LAUREN F. PFISTER: From Ladakh to Budapest via Broadwindsor: The Journey of an Unusual Gift of Ti-betan Books

LAUREN F. PFISTER: Breaking the Code of a Monstrous Codex: An Intellectual Journey into the Hidden Secrets of the Original Notes on the Book of Proverbs 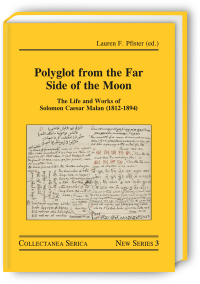