Home > PUBLICATIONS > Collectanea Serica > “A Model for All Christian Women”

"A Model for All Christian Women"

Candida Xu, a Chinese Christian Woman of the Seventeenth Century

“A Model for All Christian Women” recounts the life of Candida Xu (1607–1680), foremost Chinese Christian woman of the seventeenth century. A granddaughter of the prominent Chinese Christian convert and statesman Xu Guangqi (1562–1633), Candida Xu was raised from birth as a Christian in a Christian household, due to the earlier conversion of grandparents and parents. This circumstance of her family background was formative, since her childhood was shaped by both her native Chinese culture and by Christian influences that helped root in her receptive spiritual nature a strong, living faith. Her story, seen in the context of Christian families, marriage alliances, and conversions in the Shanghai area in the seventeenth century, points up the importance of the family in the transmission and continuance of Christianity in China.

Sources for the book include the biography of Candida Xu titled Histoire d’une dame chrétienne de la Chine (Paris, 1688) written by her confessor Philippe Couplet, S.J. (1623–1693), an obituary of his mother and other writings by her eldest son, the Xu family history, and other European missionary and Chinese language sources. The book tells of Candida Xu’s life as daughter, wife, mother, and generous contributor to the Christian Church after she was widowed, and sets her life in the context of historical and religious circumstances of that era in China. Candida Xu did not set out to gain power or influence; her only concern was to live her Christian beliefs to the utmost. In the course of following this determination, her active faith led her to make choices that helped her and other believing Christian women to gain greater freedom of choice and action. Living as a faithful Christian woman in Chinese society, Candida Xu used her position as wife, mother, and member of the social elite to work for the advancement of Christianity, never challenging the norms of society but using them to help attain her goals. The admiration he felt for Madame Xu’s devotion, dedication, and generosity led Philippe Couplet to call her a model Christian woman, a description taken up by Chinese Christian leaders from the late nineteenth century on to advance Christianity in China and to promote lay action in the Chinese Catholic Church.

Chapter One: Roots of the Xu Family: The Generations before Candida Xu 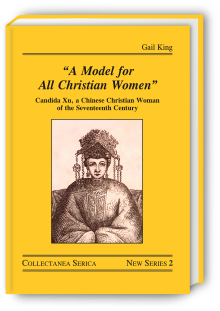