Home > PUBLICATIONS > Collectanea Serica > Jingjiao. The Church of the East in China and Central Asia

Jingjiao. The Church of the East in China and Central Asia

The contributions in this volume were mostly first presented at the conference “Research on Nestorianism in China. Zhongguo jingjiao yanjiu 中國景教研究” held in Salzburg, 20– 26 May 2003. Like the conference, the volume explores the subject of “Nestorianism” (jingjiao, “Luminous Religion”) in a variety of aspects. The material of the present collection is organized in five parts. The first part presents different aspects of the past and current research on jingjiao. The second part discusses jingjiao in the Tang dynasty, especially the question of the “Nestorian” texts and documents, their authenticity and theology. The third part deals with the “Nestorian” inscriptions and remains from the Yuan dynasty, especially from Quanzhou. Part four is dedicated to questions of the Church of the East in Central Asia and other historically relevant countries. The last part of the book presents a “Preliminary Bibliography on the Church of the East in China and Central Asia” prepared especially for this volume.

“The Institut Monumenta Serica is renowned worldwide for the thoroughness of its publications. The present volume under review is a recent instance of a tradition firmly established. It will probably remain for years to come a point of reference in the field of the History of Christianity in China, a field of study that, as far as the Stele of Xi’an is concerned, attracts more and more attention of Chinese and overseas researchers.”

Matteo Nicolini-Zani: Past and Current Research on Tang Jingjiao Documents: A Survey

T.H. Barrett: Buddhism, Daoism and the Eighth Century Chinese Term for Christianity. A Response to Recent Work by Antonino Forte and Others

Chen Huaiyu: The Connection between Jingjiao and Buddhist Texts in Late Tang China

Max Deeg: Towards a New Translation of the Chinese Nestorian Documents from the Tang Dynasty

Lin Wushu: Additional Notes on the Authenticity of Tomioka’s and Takakusu’s Manuscripts

Gunner B. Mikkelsen: Haneda’s and Saeki’s Editions of the Chinese Nestorian Zhixuan anle jing. A Comment on Recent Work by Lin Wushu

Ge Chengyong: The Live Style of Nestorian Preachers and Their Cultural Influence on China during the Tang Dynasty (Chin.)

Jürgen Tubach: Deuteronomistic Theology in the Text of the Stele of Xi’an

Benoit Vermander: The Impact of Nestorianism on Contemporary Chinese Theology

Geng Shimin: Reexamination of the Nestorian Inscription from Yangzhou (Chin.)

Tjalling Halbertsma: Some Notes on Past and Present Field Research on Gravestones and Related Stone Material of the Church of the East in Inner Mongolia, China. With 21 Illustrations of the Hulsewé-Wazniewski Project in Inner Mongolia

Ken Parry: The Art of the Church of the East in China

Peter Zieme: A Cup of Cold Water. Folios of a Nestorian-Turkic Manuscript from Kharakhoto

Maurizio Paolillo: A Nestorian Tale of Many Cities. The Problem of the Identification of Urban Structures in Önggüt Territory during the Yuan Dynasty according to Chinese and Western Sources

Heleen (H.L.) Murre-van den Berg: The Church of the East in Mesopotamia in the Mongol Period

Christoph Baumer: Survey of Nestorianism and of Ancient Nestorian Architectural Relics in the Iranian Realm

Preliminary Bibliography on the Church of the East in China and Central Asia. 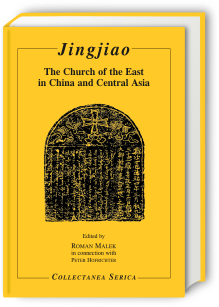