Selected Studies on the Bible in China

The Slovakian literary comparatist and Sinologist Marián Gálik was one of the first scholars to point out the importance of the Christian Bible as a source for secular writing in China. In his Selected Studies, Gálik provides a panoramic view of the Bible's function in twentieth-century Chinese fiction, drama, and poetry. He analyses the different ways in which authors, such as Lu Xun, Mao Dun, Bing Xin, Gu Cheng, and Wang Meng, have appropriated the biblical text. Other themes include recent studies by Chinese scholars on the Bible and comparisons of Chinese translations of biblical texts, namely, the Psalms. Gálik focuses on questions of intertextuality and demonstrates his faith in the possibility of interreligious and intercultural understanding.

The collection of Gálik’s essays is a goldmine in terms of its richness of information, inspiring comments and stimulating ideas regarding the influence of the Bible on Chinese literature in the past two centuries.

The "Third Covenant" and Interreligious Understanding. Confessions of an Idealist

The Reception of the Bible in the Peoples' Republic of China (1980-1992). Observations of a Literary Comparatist

A Comment on Three Chinese Books on the Bible

Lü Zhenzhong: One of the Chinese Translators of the Bible

The Song of Songs (Šir hašširim) and the Shijing. An Attempt in Comparative Analysis

Temptation of the Princess. Xiang Peiliang's Decadent Version of Biblical Amnon and Tamar

Young Bing Xin and Her Poetry

Between the Garden of Gethsemane and Golgotha. The Last Night and Day of Jesus in Modern Chinese Literature (1921-1942)

Parody and Absurd Laughter in Wang Meng's Apocalypse. Musings over the Metamorphosis of the Biblical Vision in Contemporary Chinese Literature 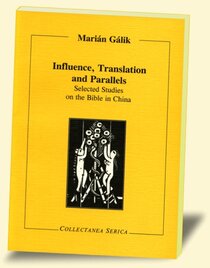