It has been some time since friends from afar could gather in person to exchange their various perspectives on the field of Sinology. To offer such an opportunity, the National Central Library (Taipei), the Center for Chinese Studies (Taipei), the Department of Oriental Studies of the Sapienza – Università di Roma, the Monumenta Serica Sinological Research Center (Taipei), and the Monumenta Serica Institute (Sankt Augustin) jointly organized the international conference “Literature, Religion and Humanities: Cross-cultural Processes in Modern China,” held in Rome from 25–26 November at the Department of Oriental Studies at Sapienza University.

After the long conference break since 2020, the organizers opted for a broad scope of topics that allowed researchers from different parts of the field to contribute to this event and explore the cross-cultural and cross-lingual exchanges which have shaped the course of China’s history and enriched both Eastern and Western cultures. In a very compact schedule, 20 researchers from Italy, Taiwan, Japan, and Germany were able to present and discuss their contributions with an audience of students and researchers (both in attendance and online). The Italian Sinologists were from the renowned Sapienza University and the L’Orientale – Università di Napoli, home to the very first department of Sinology in Europe.

The keynote speech by Henning Klöter on “Western Missionaries and Chinese Linguistics: Documents, Periods, and Ideologies” offered a thought-provoking reflection on meta-topics of the production of knowledge about China such as the availability of data, the question at which point – and to which degree – it was possible to verify or falsify reports on China, the influence of theological positions on the gathering and production of knowledge, and closely related to that, the role of missionaries as both brokers and gate keepers of knowledge. The individual sessions (PDF) were organized along the topic of Missionaries as creators and transmitters of knowledge (Session I), modern to most recent literature (Session II), China and Italy (Session III), cultural exchanges on the levels of language and geography (session IV), and cultural exchanges in the fields of religion, philosophy, and culinary culture (Session V).

Dirk Kuhlmann represented the Monumenta Serica Institute with the contribution “Approaching the Numinous in Literature – Religious motives in the Sinophone novels of the Taiwanese Indigenous Authors Neqou Soqluman and Badai.” (PDF) This talk addressed the conference’s topic from a contemporary and Sinophone angle. Kuhlmann analyzed the adaptation and function of Indigenous religious motifs and myths in the novels Donggu shafei chuanqi 東谷沙飛傳奇 / Palisia Tongku Saveq (The Legend of Tongku Saveq, published in 2007) by the Bunun author Neqou Soqluman 乜寇•索克魯曼 and Wulü 巫旅 (The Journey of a wu Practitioner, published in 2014) by the Puyuma author Badai 巴代. 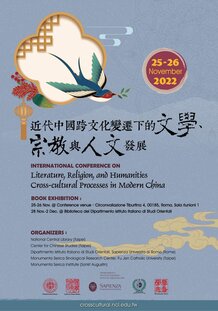 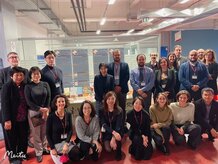